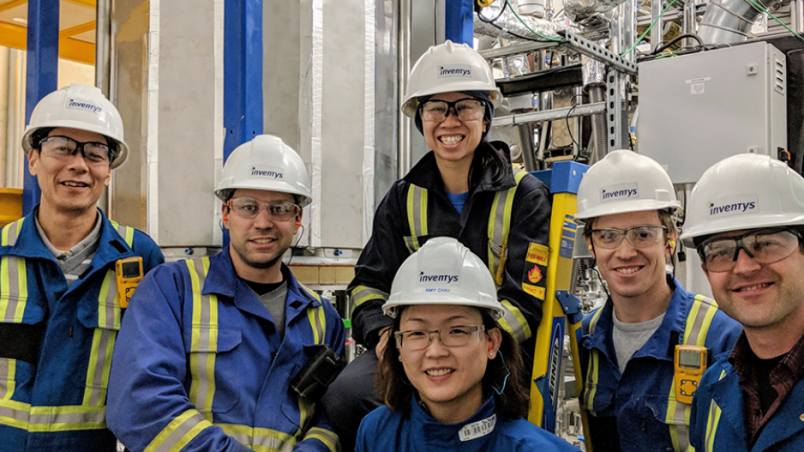 Members of the Inventys mechanical team onsite at Husky Energy. Construction of the 30-tonne per day carbon capture pilot plant will be completed Spring 2019.

Innovative technology aimed at dramatically reducing the cost of capturing CO2 from industrial operations is in the final construction stages and due to begin collecting data by the end of summer. Inventys is currently installing a 30-tonne per day pilot plant for its patented technology at a Husky Energy site.

The project is the world’s first pilot-scale plant using structured adsorbents to capture carbon from a once-through steam generator for use in heavy oil recovery. The VeloxoTherm™ System maximizes carbon capture productivity, cuts capital costs, and reduces energy consumption. The technology would be highly applicable to sites in Alberta’s energy industry and for the global market.

“That’s our goal, that’s what we are going after, and that’s what we believe the market needs to enable widespread CO2 capture,” said Inventys Co-Founder and VP, Strategic Accounts & Government Affairs, Brett Henkel.

“We’ve been at this for more than 10 years. We started early with friends, family, and angel investors, and we believe that we are very close to commercialization. We are right in the heart of proving the technology at a significant scale.”

ERA provided over $3 million to the project, valued at over $20 million, through a 2012 funding opportunity focused on cleaner fossil fuel production and carbon capture. This demonstration is the final milestone of the project.

“The ongoing support we’ve received from funding partners like ERA continues to have a significant impact on our ability to commercialize our CO2 capture technology as a low carbon-footprint solution for the energy sector,” said Henkel. “Obviously, there is a risk of going to the next stage and a lot more resources are required. So, you have to find the organizations and partners willing to take that risk with you.”

Inventys has also received financial support from the Oil and Gas Climate Initiative (a consortium of 13 of the world’s biggest oil and gas companies), Husky Energy, Chevron Technology Ventures, Chrysalix Venture Capital, The Roda Group, and the U.S. Department of Energy. The company has grown from 25 workers to more than 60 over the past 18 months as the technology gets closer to commercialization.